We would like to thank everyone who came out to our first ever IISD-ELA Fall Feast and Elder-Youth Dialogue.

Despite the rain, on Wednesday, October 28, over 30 people from seven communities, the Grand Council of Treaty Three and Bimose Tribal Council visited the IISD-ELA field station for a day of discussion, food and ceremony. 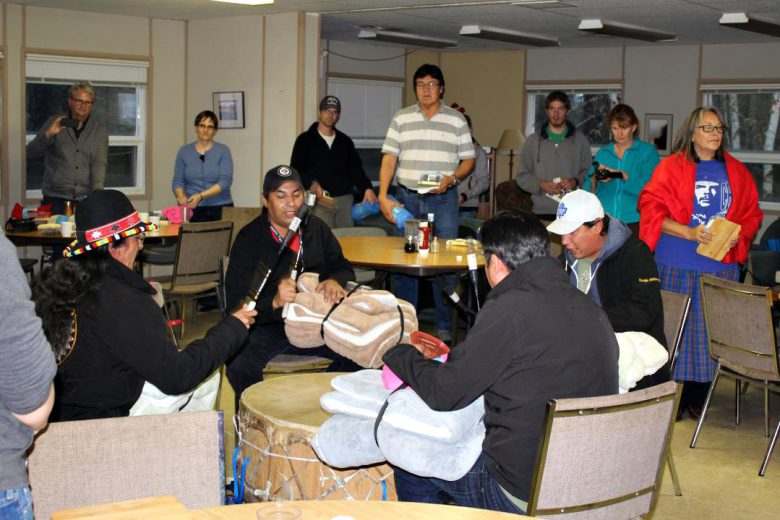 Honoured by drummers from Whitefish Bay, the day included a tour of the facility and a discussion about observations of climate change in the Treaty Three Area by both Elders and IISD-ELA scientists.  The objectives of the day were to open up the discussion between First Nations Elders and IISD-ELA scientists; engage youth in science, the natural environment and a changing climate; provide an opportunity for a transfer of knowledge from Elder to youth; and celebrate the work of the past year and the relationships that are being built.

The discussion focused on Elders’ observations of the importance of land and water to First Nations People. They described changes in the environment, including less snow, slower freeze ups and shifts in wildlife behaviour. They also described a time when they could travel the northern waterways without concern of pollution of any kind. Dr. Michael Paterson, Chief Scientist at IISD-ELA, described how environmental data has been collected at the Experimental Lakes Area for the past 47 years. Although this scientific analysis is a different way of learning about the environment, much of what has been observed is similar to what was described by the Elders from the area. Dr. Paterson explained that the IISD-ELA long-term data set has shown a warming trend in air and water temperatures and a longer ice-free season on ELA lakes. He also explained that the data show a 30-year cycle between wet and dry conditions.

The IISD-ELA field station is located in Treaty Three traditional territory, and we wish to pay respects to the Anishinaabe Nation and the rights holders of Treaty Three land. Over the past year, with the generous support of Tides Canada, IISD-ELA has been building relationships with First Nations communities in the area and working to understand their concerns and needs. We hope that activities with Treaty Three communities moving forward will include collaboration and communication in areas of common interest, including the environmental impacts of resource development, education, youth engagement and traditional ecological knowledge.